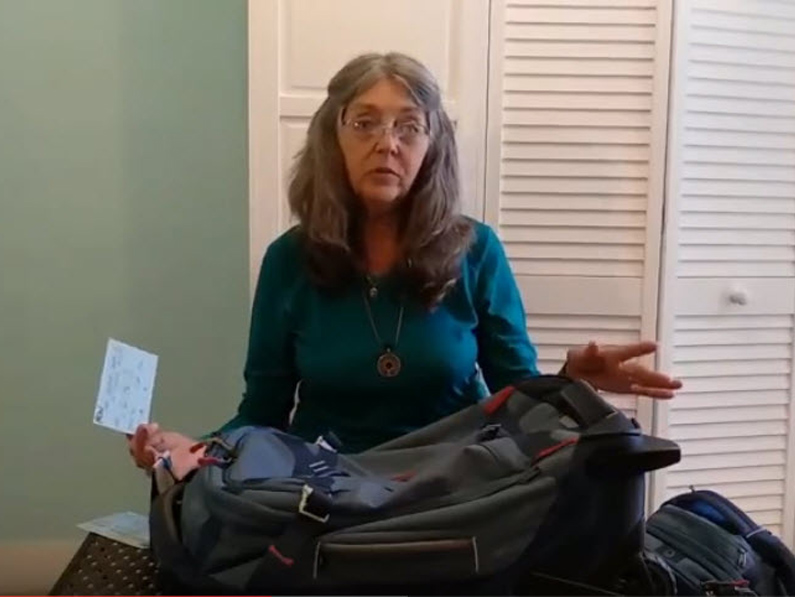 Why I needed a new bag

When I first packed up and headed to Colombia I did luggage research and selected an Osprey Porter 46 (read my report here). It has hidden straps that let me carry it as a back pack, or I could just carry it using it’s handles. And even though the 46 liter size was way smaller than what I was used to traveling with, I really wanted to travel lighter and smaller.

But after 2 years of actually using it, I made some personal discoveries…

I still love this bag. It has held up superbly and I will keep. But my needs have changed.  I truly long for wheels!

My upcoming 5-month European trip was the impetus to downsize even farther, and to acquire those coveted wheels.

My other big goal was to get a bag small enough to fit into the overhead compartment of even the most restrictive European budget airline. Wave good-bye forever to checked bag fees and waiting at the carousel. And I knew if I had a smaller bag I would have to force myself to bring less stuff, thus making it light enough that I could heft it up there without assistance.

I went into my research mode, reading countless descriptions and reviews, and watching videos. With a capacity of only 36 liters, sturdy wheels and long extendable handle, the Eagle Creek Load Warrior International Wheeled Duffel was my final selection.

The bag itself weighs under 5 pounds, giving it the highest capacity for the lightest weight that I found. It had rave reviews and it even looked good!

However, when I first ordered it, I did not realize that there was a smaller international version of the same bag available. I had inadvertently ordered the slightly larger one suitable for USA airlines, but not small enough for the super restrictive European ones.

But finding and ordering the international version led me on an unexpected deeper research project…  I soon discovered that last years model of both versions of this bag had different names, different weights and in one case even different dimensions! Even worse, the various companies selling the bags didn’t know which one they were selling.

So with both both bags on hand I decided to make my first Youtube video, showing both bags side-by-side. I also explain the differences from the prior years bags so you can understand which one you are really getting. I hope you find this video helpful in choosing the right bag for you.